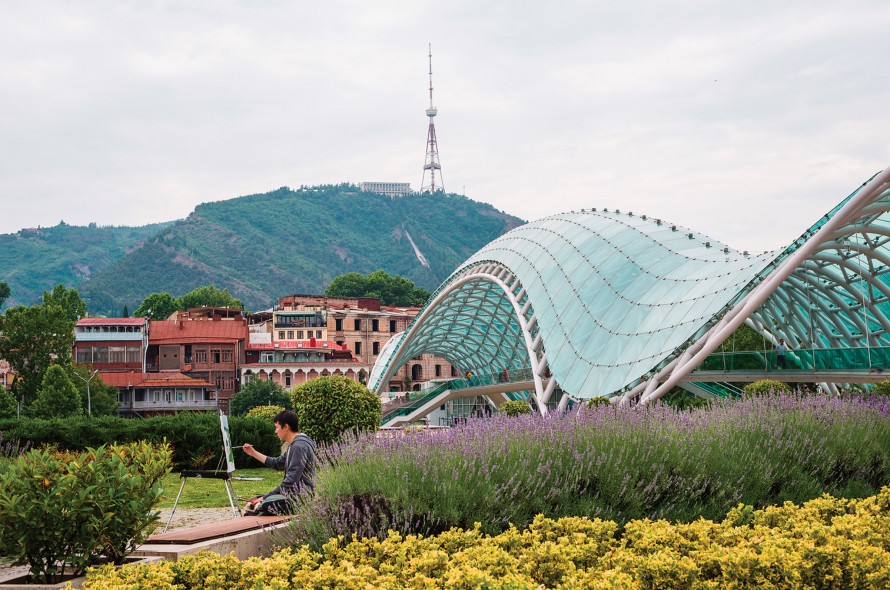 The California of the Caucasus

Back when Georgia — a country bordered by the Black Sea and the Caucasus Mountains — was behind the Iron Curtain, it was fancied the California of the U.S.S.R. Slightly smaller in size than South Carolina, but with impressively diverse terrain, this fertile country had a reputation for producing exceptional fruits and vegetables, superb wines and talented filmmakers. “When I was studying in Leningrad in the ’70s,” says Ambassador Ian C. Kelly, currently stationed in Georgia, “a group of us were taken to Tbilisi. Arriving there was like arriving in Oz — suddenly everything went from black and white to color.”

The Georgia-born designer Demna Gvasalia lent a glamourized cool to the country last year when he was appointed the director of Balenciaga, but what’s increasingly attracting visitors is Georgia’s gutsy little capital. Having survived civil war in the early ’90s, then a peaceful, pro-Western revolution in the aughts, Tbilisi has rebounded mightily, and newfound ambition is visible everywhere. You can see it on the leafy, Paris-style boulevards that parallel the Kura River, now spanned by Michele De Lucchi’s bow-shaped showpiece, the Bridge of Peace; in the proliferation of new restaurants featuring the country’s Persian- and Asian-inspired dishes; and in an electronic music scene that some say rivals Berlin’s. (Homophobia remains a serious issue, but the flood of young, international tourists is increasing open-mindedness.)

According to legend, Tbilisi was founded in the fifth century on thermal springs, and its cobbled streets are still scented by sulfur, though only a handful of the traditional bathhouses remain in the ancient neighborhood of Old Town. The city is a fanciful, often romantic hodgepodge of architectural influences that offers a brick-by-brick timeline of occupiers: Persians, Byzantines, Ottomans, Russians and Soviets. A medieval fortress looks out over Art Nouveau mansions, Brutalist monuments and the modern villas of billionaires, some floating above the city like U.F.O.s.

The roots of the local cuisine stretch back almost as far, to the sixth century, when Tbilisi was a trade stop on the Silk Road. You can taste the world in the local dishes; the more traditional flatbread is baked in clay ovens, similar to a tandoor, and khinkali, broth-filled dumplings, rival Hong Kong’s. Georgia’s grapes are even older — the oldest known location of cultivated vines is in the South Caucasus — and several winemakers are bringing back and refining the 8,000-year-old kvevri method of production, which involves storing wine, often underground, in clay vessels. The amber-hued wines in particular, made from fermenting white grapes with their skins, are gaining attention from international connoisseurs.

You will not drink alone. Georgians have, it seems, a congenital need to party and all are welcome, particularly the robust. On a balmy Saturday afternoon, at the newly opened Khasheria, a restaurant across from the domes of the Royal Bath, Georgian socialites and artists, including the award-winning director Levan Koguashvili, were sharing wine and chikhirtma, a ramen-like broth made with chicken, eggs, lime and mint. “Georgian cuisine is essentially refined hangover food,” says the chef and owner, Tekuna Gachechiladze. “Most of this crowd will be back again tomorrow, drinking, singing and telling stories.”

Tbilisi’s first and only contemporary boutique property is located in the atmospheric neighborhood of Vera. A former publishing house reinvented as a 137-room hotel in 2014, Rooms’s eclectic public spaces are reminiscent of Soho House, from the cozy main lounge (velvet couches, fireplace) to the wooden tables and pine green walls of the airy, open-kitchen restaurant. Suites include ­subway-tiled bathrooms and vintage telephones. The ­ambitious Adjara Group, the team behind Rooms, has multiple projects in the works, including Fabrika, a soon-to-open, next-generation youth hostel that will include an art-residency program.

For a taste of authentic Georgian cuisine (including khachapuri, the addictive eye-shaped cheese bread) you can’t do better than this celebrated family-owned restaurant, which grows its own produce in its garden. It isn’t far from the airport, which means that you can make it your first meal and your last.

American-trained chef Tekuna Gachechiladze opened this spot a year ago, with a menu that offers modern takes on classic Georgian dishes. Set in a walled garden behind a majestic Art Deco mansion, there is no lovelier place for dining in Tbilisi — particularly at night, when the dozen or so tables, scattered among beds of crawling ivy, are lit by candles

Opened by eight of Georgia’s leading natural winemakers, tiny Vino Underground, with just a half-dozen tables, is always packed. (Seated at one table on a recent afternoon: the award-winning cookbook author Olia Hercules, researching Georgian wine regions.) The subterranean bar and shop, with its low, arched stone ceilings, serves and sells a wide range of labels including artisanal cellars unknown outside of Georgia.

Anyone can set up a blanket at this market, so the pickings are hit or miss. But when the goods are good, they’re very good. Depending on your definition of treasure, you are likely to find Soviet maps and posters, old coins, toy soldiers, amber necklaces, fur hats, vintage children’s books and antique silverware. Open from sunrise to sunset every day, unless it rains.Dedaena Park.

International techno stars tend to play cavernous clubs such as Bassiani. Homegrown talent, like Gogi Dzodzuashvili of Post Industrial Boys and Tomma Chaladze, prefer the more alternative vibe of this cozy cafe. The space turns into a bohemian, gay-friendly, 24-hour nightclub on weekends after midnight, with the night owls heading home just as the late morning crowd arrives.

Tbilisi’s many grand historical institutions and museums are impressive and well maintained, but there are few platforms for contemporary art. This gallery, run by art instigators Irena Popiashvili and Tamuna Gvaberidze, features the best of a small but thriving scene that includes photographer Marika ­Asatiani and the sculptor Giorgi Khaniasvili.

We took a KIA to go around Tbilisi for 5 days. The staff was very helpful too meet us at the airport, waited for us to change money. The car was new, we had zero problems and got our full deposit back.
Read more