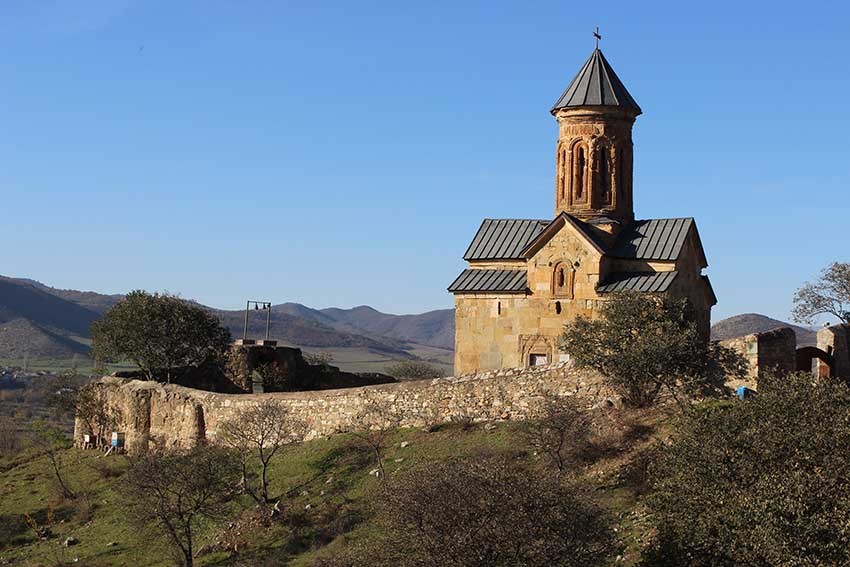 "Kvemo Kartli" - “Lower Kartli” is a historic province and current administrative region in southern Georgia. Kvemo Kartli has historically been located at the furthest frontiers of Georgia, which is why it has always been the first point of attack for numerous invaders.

Historical monuments here are plentiful, among which are ancient castles, beautiful churches, museums and other memorial places.
We decided to offer you the route, which runs along the Kvemo Kartli region and extending to places, which are not widely known. The route length is 130 km in one direction. We have traveled the whole route by ourselves, photographed and even looked into the "German Mill.",

The monument of Nine Brothers Kherkheulidze

The ruins of the town of Dmanisi
Our Route №3 to the sights of Kvemo Kartli starts from Liberty Square, Tbilisi. (Marked With Letter A)

The monument of Nine Brothers Kherkheulidze

The monument of Nine Brothers Kherkheulidze, who with sister and mother died defending the homeland in the "Marabda Battle"(1625). When the banner, that had led their army through the battles at Didgori and Basiani, fell from the hands of the youngest brother, their sister grabbed hold of it immediately, and when she also fell, the banner and symbol of Georgian invincibility was raised up again by their mother, who also was killed.  The battle ended later that night with the defeat of Georgian army, but the heroism of Nine Brothers Kherkheulidze with their mother and sister and nine thousand martyrs of Marabda were canonized by Georgian Orthodox Church. The self-sacrifice of Nine Brothers was represented in Georgian poetry. (Marked with letter B)

Tsurtavi - (Kolagiri old name) is a village near Bolnisi. The old Tsurtavi probably was destroyed by Arab invaders. Nowadays in the castle of Kolagiri is situated the nunnery of St. Martyr Queen Ketevan. The date of the construction of the castle is considered to XVIII century.  This is one of the last castles built in Kartli region. (Marked with letter C)

On the trail of the past you should visit Hotel & Restaurant “German Mill”, which we recommend basing on our experience. Here you will find the great Georgian cuisine and wine. (Marked with letter D)

Bolnisi church is one of the oldest in Georgia. Bolnisi Sioni was built in the 5th century, during Vakhtang Gorgasali's reign. (Marked with letter E)

Tsughrughasheni is Georgian architecture monument of XIII century. St. George's cross-domed church is situated in a few kilometers from village Kvemo Bolnisi on the mountain slope, on the right side of river Poladauri. The monument is richly decorated with luxurious decorations. The temple is decorated with carved bricks from the outside. (Marked with letter F)

XVII -XVIII cc. outstanding writer, scientist and political figure, Sulkhan Saba Orbeliani’s literary museum is located in the village Tandzia, where the different editions of his works and paintings, graphic arts, photographs, documents about his works of Georgian artists. Tandzia’s St. Nicholas Church is located in Sulkhan Saba’s Literary Museum and is the court church of Orbelians. It was Built in 1683 by Sulkhan-Saba's father, Vakhtang. (Marked with letter G)

The medieval castle “Kveshi” was built on the valley, raised and almost inaccessible from all sides on a high cliff. The first mention of the citadel on this place belongs to VII century, to the era when the neighboring town of Dmanisi yet has not found its meaning and power. (Marked with letter H)

The ruins of the town of Dmanisi

The ruins of the town of Dmanisi are world famous. In 1990, during archaeological excavations, scientists discovered the oldest remains of a Eurasian man ever found, dated to 1.7 million years ago. Archaeologists have unearthed only a small portion of the area where the ancient dwellings were discovered. Here also is the Dmanisi Sioni basilica from the 9th century, along with some small churches and other buildings. (Marked with letter I)

Take a car in the company of KM Rental Cars (not necessarily SUV) and feel free to go on a trip to KM Route № 3.

Do not forget the phone with a local SIM-card and Wi-Fi router to always be in touch!